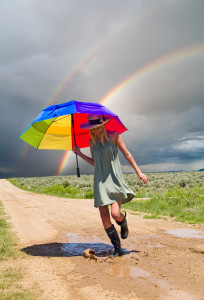 From In All Our Affairs, Making Crises Work For You, Surrender:

“’Let go and Let God.’ It sounds so simple. But when our circumstances or the circumstances of those we love weigh heavily on our minds, we may have no idea how to do it. Some of us struggle with the very idea of a Higher Power. Others begin to question long and deeply held beliefs, especially in stressful times…

Many of us review the same scenario again and again, looking for that elusive answer that will solve everything, obsessively wracking our brains for something that we could do differently or should have done differently in the past…As long as there is a chance of figuring out a solution, we reason, we should keep trying…We may secretly feel that this problem is too important to trust to God, as if we had the power to prevent God’s will from unfolding by the mere exercise of our resistance. We fear that if we surrender, anything could happen.

Actually, anything could happen whether we let go or not. It is an illusion that as long as we cling to the situation we have some control…Surrender means accepting our powerlessness to change many of the realities in our lives…It means trusting instead in a Power greater than ourselves. Faith has been likened to being in a dark tunnel and seeing no glimmer of light but still crawling forward as if we did.

Though our circumstances may seem dark indeed, when we turn to a Higher Power rather than to our own stubborn wills we have already begun to move toward the light.”

“Moving toward the light…” I really love the sound of those words. What could be darker than watching my daughter self-destruct over the course of fifteen years? How have I learned to “dance in the rain,” even as she has continued to slip away?

My resistance training at the gym has shown me that pain comes from putting resistance on the force exerted, and that has served me in strengthening my body. But my spiritual life demands just the opposite. My strong will and determination to save Angie from drug addiction was instinctive; it would be counterintuitive NOT to step in and interfere in my child’s self-destruction.

But once I became educated about the nature of addiction as a brain disease, I realized that other than offering my love and emotional support, there was very little I could do. I did send her to four rehabs, which bought her some time. Once or twice would have been enough to show her the tools of recovery. At what point do we need to make our adult children responsible for their own recovery from this cunning disease?

I will let go of my strong will to save Angie and trust that God has a bigger plan. I have faith that things are unfolding as they are meant to—and in God’s time. In my view, faith and acceptance go hand in hand.