“Many people are not strong enough to battle the terrible force of addiction on their own. Application of the Twelve Steps had proven successful over and over again since they were put together by a couple of alcoholics and their friends back in the late 1930’s. Addicts need help; some say they need spiritual help. Our society is full of naysayers—skeptics who eschew these programs that are found in every major city across the country, and in big cities, in many of the churches, meeting three or four times a day. There’s a reason for the popularity of Twelve-Step programs: they work for many people. So I promised myself I would try harder now. Angie was worth it. Angie was worth it?

There is no one place on this journey to pinpoint where I discovered that I was worth it. I knew what a flawed human being I was. I was aware of my mistakes along the way—big ones and little ones.

But as I was starting to embrace the principles found in these Twelve Steps I was reacquainting myself over and over again with my own humanity and feeling my self-worth solidify with roots into the earth. None of this growth in me would have occurred if Angie’s illness hadn’t pushed me onto this path. And I would always—still—reckon with the survivor guilt that has challenged my right to be happy while my daughter still struggles with addiction.

There are many who view Twelve-Step groups as cultish and unattractive. There’s such a powerful stigma in our society against addiction in all its forms that, I suppose, families of addicts suffer from guilt by association. Early on in my recovery my sister, Lucy, once said that it must be nice to have “those people” to talk to. But as she’s watched me grow and change these past few years I think she’s developed a healthy respect for the Program.

To this day, though, Lucy has never discussed with me the dark side of our father, the alcoholic. Maybe she never saw his dark side, as I did. To her, he was the best father in the world, and I have no need to invade that sacred place where she holds him in her heart. In fact, I agree with her. He was a very loving man who passed on many gifts to his children and grandchildren. Yes, he was sick, and he died too young because of it. But just as I have forgiven my mother for any ways she may have hurt me so have I lovingly accepted my father’s illness. And in learning to forgive my parents and others who have wounded me in my life, it has become easier for me to forgive myself for my own shortcomings.

I, being an addict, a daughter of one and a parent of one, have found myself quite at home among these seekers of peace and serenity. I’ve been in the right place for twelve years now, and I cannot begin to tell you the gratitude I feel for the wisdom in this simple program that has helped me to look forward to the sun coming up every day—and to embrace my life in its entirety.” 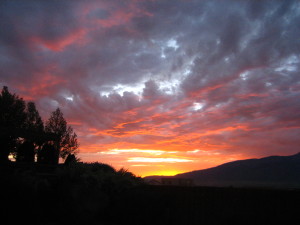