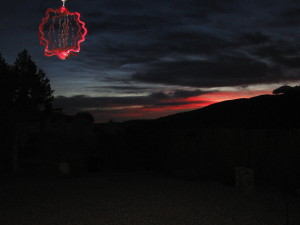 My son and I loved to fly kites when he was growing up in Virginia. The right kind of wind could propel his paper bird high and far, with us right on its tail giving it enough slack to keep it soaring in the air currents.

He’s a grown man now, but I remember a day twenty-five years ago when we were living in Athens, Greece. We were driving home from his friend Chris’ house. Chris lived on Penteli Mountain, one of my favorite haunts outside of Athens.   From the crest of this hill on a clear day in winter you could see the whole bowl of Athens, with the smog hovering overhead, and even beyond. This was where the Brits came to celebrate Boxer Day every December 26. They hiked up more for the whiskey than the view, but that’s another story.

As we turned the corner, we saw the tail of a kite peeking out from under a pile of rubbish. We knew it was a kite tail because it had flags zigzagging down the string. Also, everyone came to fly kites on Penteli Mountain in December when the weather changed. This kite had lost its wind and lay abandoned in the field, its owners having no more use for it.

And so, our curiosity taking over, we stopped the car, got out, and went to investigate. Right away our curiosity turned into compassion and we wanted to breathe new life into this broken and tattered old kite. I never thought that something inanimate could come to life. But at this time in my life there was a dying in me that I knew I had to defeat or it would defeat me. My son was part of this tragedy, and somehow we knew that the road to healing could start with repairing this kite and watching it fly again. A dust-covered old TV pinning it down to the ground was holding the kite hostage. Its colorful tail saved it from certain death.

So we took the kite home and repaired it with glue and tape. We waited for a good day with just enough wind to try and fly it. The day finally came, a clear sunny day with a nice breeze. Together we took the kite back to the mountain and flew it. We watched it continue to rise and float in the air until all the string was used up. We ran with it as it leaped in the wind. It was flying like it was brand new – a miracle!

We didn’t let that kite go. We brought it down and carefully put it in the car. We knew we would probably never fly it again, but we couldn’t let go of something that had taught us such an eloquent lesson: I was sure from that day on that there are second chances in life for those who have the heart to reach for them.