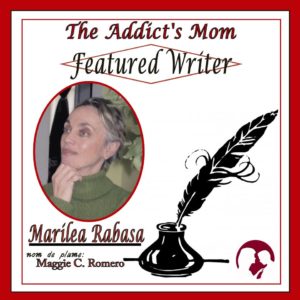 When Angie was in her last rehab in 2009, I flew across the country for Parent’s’ Weekend. After excitedly showing me around the grounds, she bumped into a couple of new friends.

“Hey Angela, show us more of those moves.”  Angie still enjoyed showing people what she had been able to do as a gymnast in Greece.

“Sure,” she said, proud of her agility. She showed us, among other things, a backward twist that must have been difficult then. She wasn’t ten anymore.

When she leaned backwards toward the floor, her hair fell back and I saw the scar. She must have had an accident when she sustained a deep gash around her hairline in the middle of her forehead.

When Angie was a child, she looked like a beautiful mandarin doll. She always had a thick pile of bangs to frame her oval face. But her hair didn’t fall that way anymore because of the scar and she could no longer wear bangs.

The last time I saw my daughter was in 2012. She was still using, and since then has cut herself off from her family. But I wanted to see her and stayed in a San Francisco motel very near the hostel in the Tenderloin where she was living. She was to spend a night with me and had a key to the room. It was five in the morning when I heard her unlocking the door, and I jumped up to open it.

“Hi honey. I need to get back to sleep.”

I have a picture of her sitting on my bed the next morning, her hair pulled to the side and held with a clip.

She looked so strange—like someone else—without those lustrous bangs. But of course she was…